Discover five game-changing questions to ask every time you make a decision—questions that will help you in your finances, relationships, career, and more. 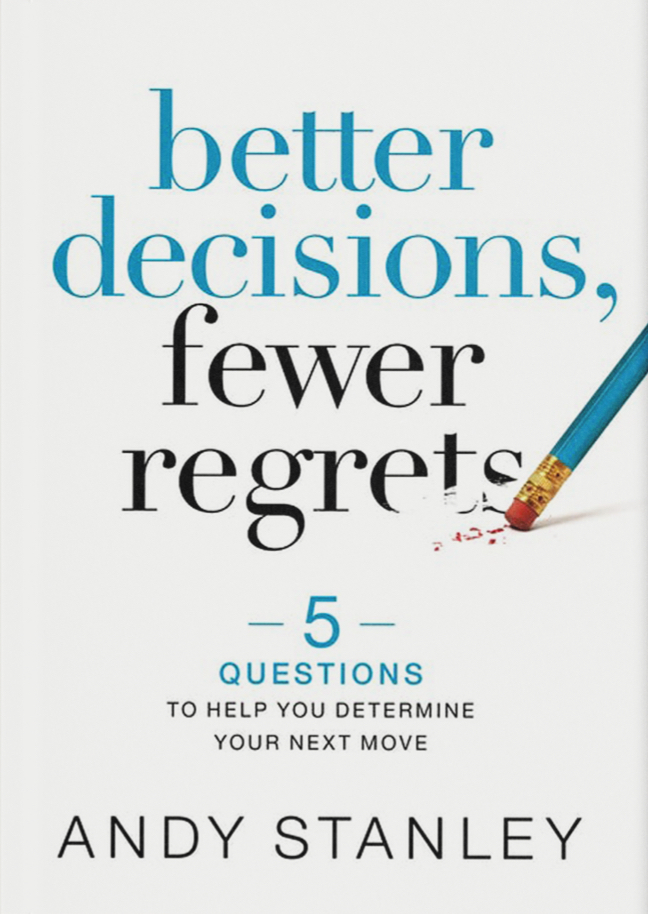 We created these special packages to take you deeper. If you order one copy, get your free Getting Started Guide. But you can get more:

Go Deeper With the Video Study

Your decisions determine the direction and quality of your life. And while nobody plans to complicate their life with bad decisions, far too many people have no plan to make good decisions. This book will help you live differently. Read a Free Chapter.

What others are saying

Classic Andy—accessible to any of us wanting to change, yet deep enough to challenge you if you think you know the answers.

I don’t know about you, but my life is complicated enough without the confusion of uncertainty or, even worse, the turmoil of regret. This book is not just a necessary guide to better decisions—it’s a handbook for life that is sure to make a difference in yours.

This is the right book for the right time. We’ve got some important decisions to make and this book will help frame the right questions to ask.

Future you is an exaggerated version of current you. In the end, the life you get ‘stuck’ with is the life you make. Now is the time to change your choices to regret-proof your future. Andy will show you how.

Andy Stanley strikes again! If you’re looking for a book that’s brimming with wisdom, insightful teaching, and that signature Andy Stanley humor, then look no further—this is it! I can’t recommend it highly enough!

Ian Morgan Cron author, The Road Back to You

Wow, in this book Andy uses insights, understanding, and even humor to bring great clarity to the life-altering decisions we will all have to make. Deciding to get this book now could absolutely lead to fewer regrets later. Communicator, author, and pastor Andy Stanley founded Atlanta-based North Point Ministries in 1995. Today, NPM consists of eight churches in the Atlanta area and a network of more than 180 churches around the globe that collectively serve nearly 200,000 people weekly.

As host of Your Move with Andy Stanley, which delivers over seven million messages each month through television and podcasts, and author of more than twenty books, including Better Decisions, Fewer Regrets; Deep & Wide; and Irresistible, he is considered one of the most influential pastors in America.

Gain insight into your decision-making habits by taking this five-minute assessment.

Join Us For an Exclusive Decision-Making Event